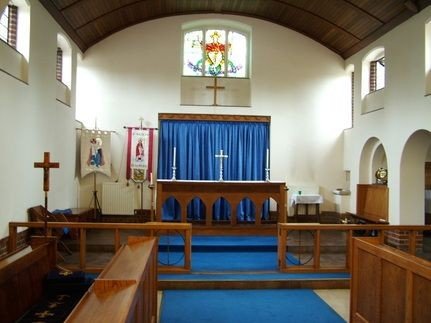 The area of land which is now Elm Park was part of the parish of Hornchurch. When work began on the Elm Park estate in 1934, St Andrew’s Hornchurch recognised the urgent need for a new church to serve the rapidly expanding part of their parish, so a temporary dual-purpose building was built on a large plot of land bounded by Woodcote Avenue, Eyhurst Avenue and Timmins Avenue (now St Nicholas Avenue). The building was erected on the north east corner of the site.

The new church was dedicated to St Nicholas by the Rt. Rev. Henry Wilson, Bishop of Chelmsford on June 8th 1936.

The ‘Essex Times’ published a report on the service, in which it said that so many people attended the service that they could not all gain admission, and the Vicar of Hornchurch, the Rev. C.K. Waller asked all members of the mother church to give up their seats so that Elm Park residents could find accommodation.

The Rev. H.G. King, a curate of St Andrew’s, became the first Priest-in-Charge of the new church.

The new church had a raised area at the west end where the choir sat. It was heated by two coke stoves and had a folding partition to block off the sanctuary area at the east end. There was a small tower to the north of the sanctuary with a priest’s vestry and a choir vestry above.

In 1937 a wooden hall was built, paid for by R. W. Beard J.P. All branches of the uniformed organisations then met in the hall, as did various other church groups. The church building was then used solely for worship purposes.

In 1939 a Conventional District of St Nicholas Elm Park with South Hornchurch was formed, and the Rev. G. Griffith Thomas as its first Priest-in-Charge.

In September 1939 the Second World War began, and the Rev. Griffith Thomas became a Chaplain to the Forces in 1941.

In 1941 R.A.F. Hornchurch closed the South End Road and erected a barrier in a position north of the old South Hornchurch Chapel, which made it accessible only to R.A.F. personnel. The Chapel had been compulsorily purchased by the Hornchurch Urban District Council in 1939 for road widening purposes, but continued in use until 1941.

In June 1955 building work commenced on the new St Nicholas church to the south of the existing one. Land to the west of the site was sold and developed for housing, in order to part finance the building of the new church.

On June 5th 1956, the new Church was consecrated by the Bishop of Chelmsford, and in 1957 a new Vicarage was built to the north of the Church and Elm Park became a separate Parish.

The Rev. R.C. Jones, who had been Priest-in-Charge for seven years, was then Instituted as first Vicar of Elm Park.

The Architect of the new Church was J.J. Crowe, who was also responsible for some of the pre-war churches in the Havering Deanery.

The church is an excellent building built to a traditional plan and design. It has a Chancel and Sanctuary to the east end and a Baptistry at the west end. There is a Bell Tower to the south and a Lady (or south) Chapel partly under it. There is a North Chapel and N and S aisles.

The original font of 1936 was of an unusual Art Deco design, which I believe is now in Rainham Parish Church. The present font is the oldest object in the building and was brought from the Old South Hornchurch Chapel c.1940.

The Cross window at the west end came from the west end of the original church, as did the red windows, Communion rail, Altar cross and candle sticks in the Lady Chapel.

The High Altar table was made in 1939 and was transferred here from St George’s, Harold Hill, in the late 1990s.

The stained glass east window is by Randall, and his signature of a lizard can be seen at the bottom of the window. The theme of the window is Christ seated on a rainbow throne, a theme often seen in old windows and paintings. The window is a joint memorial to a former Churchwarden, Mr W Gillison, and Mr Ernest Wybrew, who was the driver who was killed in a train derailment at Elm Park on March 29th1965. The window was installed and dedicated in 1966.

In 1994 the original church building and the Adking Hall were demolished and the new Church Centre built.

New flats were built on the old church site, the Vicarage was sold and 17 St Nicholas Avenue was purchased and became the Vicarage.

On January 19th 2000, there was a serious fire at the Church which destroyed most of the roof. A major restoration took place, and during this period services took place in the Church Centre.

The Church was re-dedicated and brought back into use by the Bishop of Chelmsford on 2nd June 2001. There is a memorial tablet in the south aisle of the Church which commemorates the Millennium and the re-dedication after the fire.

Also in the south aisle there is a board recording the names of previous Vicars. The board is a memorial to the Rev. H. G. King, the first Priest-in-Charge in 1936.