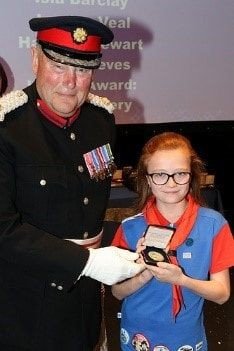 Elsie was nominated as she is an inspirational young person. She is not one to boast her achievements which became very apparent when she arrived to one of our meetings with short hair. We asked why she had decided to have her very long hair cut to which she replied “to donate my hair to Little Princess Trust, a charity that provides real hair wigs to children who have lost their hair due to cancer or other illness, it had to be at least 12” long”. She then sorted out a fundraising page with the intention of raising £600, as a wig costs between £350-£500, the fundraising made almost £2000.

She is a very valued member within the group, always happy to assist other girls that maybe struggling with an activity giving them encouragement. She will always put others before herself. She is excellent at welcoming new members making them feel at ease, she is well liked by her peers as well as leaders. Elsie will no doubt go through life thinking of others and how she could help them, an asset to any organisation.

​Elsie wanted the money from the award be spent on an evening ice-skating at the new Ice Rink but sadly they do not open to general public on Fridays so Elsie decided on an evening of 10 Pin Bowling followed by a meal at Nando’s.

When Elsie was being awarded the “Award”, the Host explained that she doesn’t normally read out the reasons why they had been nominated but just felt Elsie’s nomination should be read. Think the Leaders were as proud as her parents to hear this.​ 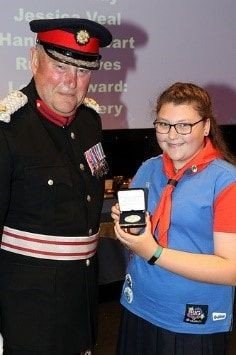 Jessica is a well-liked young person, she interacts well with all ages. She is very knowledgeable but never boasts her achievements, instead will happily share her knowledge with others. She is willing to assist others, she will make new members welcomed showing them where things are kept and the procedure.

​The presentations were by Deputy Lieutenant Colonel Markham Bryant. 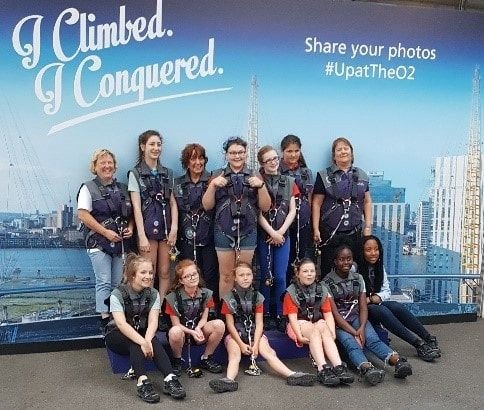 ​11 Members of 2nd Elm Park (St. Nicholas) Guides and Senior Section together with their Leaders climbed the O2 Dome. This was a request from Jessica one of our members who won a Jack Petchey Award.

The climb was to take place on Friday 6th July but due to the heat the climb was cancelled, it was re-booked for the following Friday. Oh Friday 13th but that didn't bother them.

As the original climb was cancelled we went for "Plan B", we took them on the Emirates Cable Car as part of the route home after an ice-cream.

We returned on Friday 13th July, after being kitted up we made the ascent to the viewing platform. It was a climb rather than a leisurely walk. The girls helped each other and as a team we reached the viewing platform. After a photo shoot and some cold water provided by our climb marshal we made the descent. That proved more difficult than expected but soon mastered it.

We did this climb as a sponsored walk to raise money for our church towards a Defibrillator which after training will be available for both Church & Church Centre users.

Thank you to Margaret Roberts for the Photos and text. ​